“I’m at the start line, trying to find you!” I shout frantically into my phone, as thousands of people are forcing their way around me.

Right. Because 34,999 other people aren’t wearing green shirts. This is the Shamrock run. Everyone (and their mothers) are wearing green. The smart thing would have been to wear pink. This small fact does little in aiding me to find her, and my phone chose this opportune time to drop the call.

This is how I began my St. Patrick’s Day Sunday. Up at 5:40 am with enough time to have a good breakfast (Mango banana green smoothie, anyone?), meet one of my friends, and walk to the Portland waterfront for the start of the Shamrock Run 15k.

I’ve learned that a smart person sets out their race outfit the night before. It aids in the delirium fog that one has when rising before the sun does. Even so, it didn’t stop me from putting my shorts on backwards the first go round. Green tutu, shamrock tiara, sparkly green underoos, short shorts, and tank. Check, check. Check, check, check, aaaaand check. Let’s not forget our race bib, safety pins (by now, I have a thousand,) Garmin watch, and arm band.

The race itself was fantastic. The weather was mostly cooperative, with only the slight occasional drizzle. I ran the race with the my lovely friend, Megan, who is pictured in the photo above. This was her first 15k and the furthest distance she’d ever run. Originally when we signed up for this race, she had tried to talk me into the 5k. It takes me 5k to even begin to settle into a run. They’re really not my preferred distance. Besides that, there were 35 thousand people running this race. Talk about organized chaos. You’d wait multiple minutes to even cross the start line after the gun went off. No, thank you. So, I talked Megs into the 15k with the  expectation that I would run it along side her the whole way so long as she put forth the effort in her training.

She rocked the socks off the run. She trained her heart out, and it showed in her performance for the Shamrock. The grueling hill near OHSU hardly fazed her, it seemed. I had a gentleman ask me at one point if I would trade my tutu for his beer stein hat. I politely declined. I think Megs’ only slip-up was a mile from the finish line. We’re running together when, all of a sudden, she’s gone. I look behind me to see her stuffing her face with a donut and strips of bacon in her other hand. Who puts an aid station of bacon and Hostess donuts a mile from the finish?! Now, that’s just cruel.

Post-race was spent finding the friends I never could at the start line. The cell reception there was terrible, due to the sheer number of people. We reconvened at a brewery and had ourselves some Guinness cupcakes with Bailey’s irish cream frosting to celebrate our success. Yes, homemade. And yes, gluten free.

An overall awesome race. But, that was 3 weeks ago. We are now less than one week from the Whidbey Island Marathon. Correction: I, I am less than one week away from the Whidbey Island Marathon. Do I feel prepared? Not exactly. I’ve been diligent about my weekly long runs, but the mid-week mileage has taken a bit of a hit. Truth be told, dental hygiene school is continually kicking my ass. I’m doing everything I can to kick back. I’m just looking to get through this marathon slow and steady. Just enjoy it, really. I hear Whidbey is beautiful and the scenery is lovely. I’ll really get the most out of my race entry this time!

Speaking of lovely scenery, I spent my spring break either running, working or hiking. The weather wasn’t the greatest, but the hikes were still wonderful. Here’s a smattering of photos.

The roommate and I took advantage of a Friday and made our way out to Angel’s Rest in the gorge. 4.8 miles round trip and a 1450 foot elevation gain. We ran up and then scrambled back down once. We met up with a friend and then hiked back up it for the second time in one day. Talk about sore calves and a workout. The photo below is about a mile up. That’s my pup, Monkey. Little rascal.

This is the view from the top, around the west side of the ‘rest’: 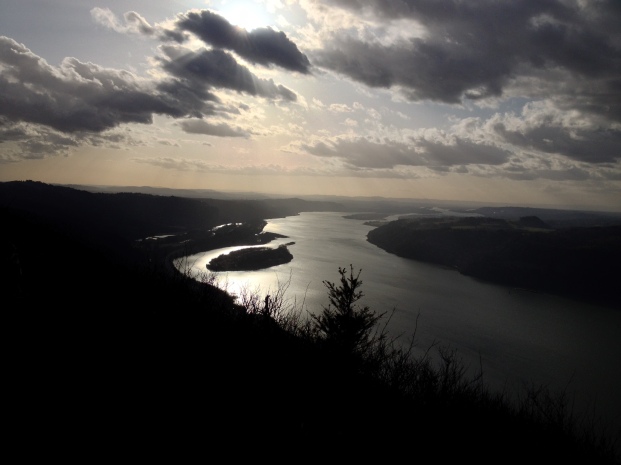 Gorge-ous! Eh, eh? The views from this place really cannot be beat. Especially considering the proximity to the city. I feel so fortunate to live in such a wonderful part of the world.

The next hike was out to a spot further in the gorge called Indian Point. It was a drizzly, brisk, and windy Tuesday, and the fog gave off such an eery feel to the entire 8 mile hike.

Just a glimpse through the fog, looking westward from Indian Point:

And last, but not least, the Wolf Creek Trestle hike. This one was a break from the gorge-ous scenery before, and more towards the coast on an old railroad. 10 miles on an out and back trail, crossing many railroad trestles and traipsing through dark tunnels. I really could not have asked for a better spring break.

Let’s talk about transformations. Those of you who follow my Facebook page have already heard about this. It was about three years ago that I started what is so lamely called my ‘fitness journey.’ I was on the cusp. I either needed to purchase new pants because all of mine were too small, or I needed to get off my ass and do something about it. At 5’9″ and hitting the 200 pound mark, stretch pants had become my best friend and I think my face had seen a few too many chocolate chip cookies.

I started out small. It wasn’t until summer of 2012, when I found out I had a gluten intolerance, that bigger steps were taken. I started eating less carbs, more protein and vegetables with every meal. No more cookies, white flour, or pasta. At least, until I learned to cook gluten-free. I took on a Paleo diet for about a year, but soon realized my love of cheese was too strong. September of 2012 found me naively signing up to train for a half-marathon and taking a boot camp class 4 days a week. I’ve since become a running addict and cannot go a day without a veggie-filled smoothie. 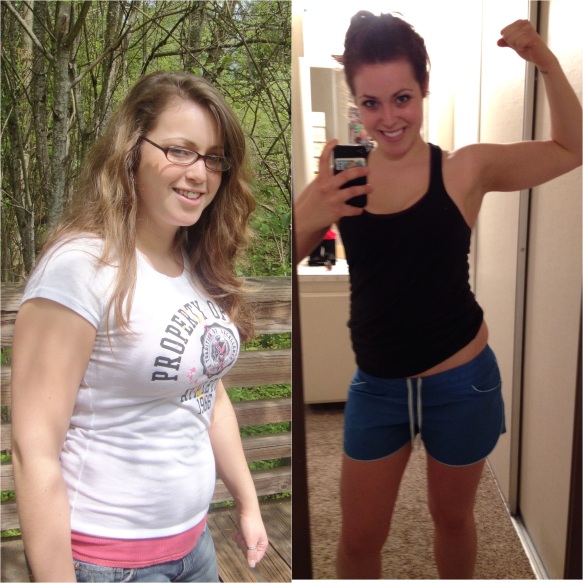 3 years and 40 pounds later, this is me. Not quite where I want to be, but on the path that I want to go. It’s an ongoing process, and I continue to see changes in both my body and my brain. This is not a before and after photo. This is a ‘that was then, this is now’ photo. This is a, ‘I have a major sweet tooth and have still managed to attain some semblance of fitness’ photo. This is a selfie! This is me as a rhinocorn. You know, somewhere in between a rhino and a unicorn?

Be strong. Don’t give up. You never know who you’re inspiring.