We interrupt our regularly scheduled, running-focused blog post, to introduce the newest member of the family. Meet Jax, our 7-week old miniature Australian Shepherd. So far, he’s a cuddly and curious little guy. He doesn’t care too much for the rain, he’s terrified of puddles, but he already loves a good ball to chase. Right now, Jax spends most of his day sleeping. I cannot wait to take him out on runs and hikes when he’s a little bigger and the walks to the end of the block don’t exhaust him.

Jax was somewhat of a spontaneous decision. We were out in Tri-cities visiting friends and doing a photo shoot (settingthingsstraightphotography.wordpress.com) and came across a listing in a local paper for mini Aussies. It was the best weekend I’ve had in a while. Friends, photography, road trip and a new addition to the family.

Heading out for a run before it gets dark. Then, it’s back to our regularly scheduled program. Enjoy the cuteness! 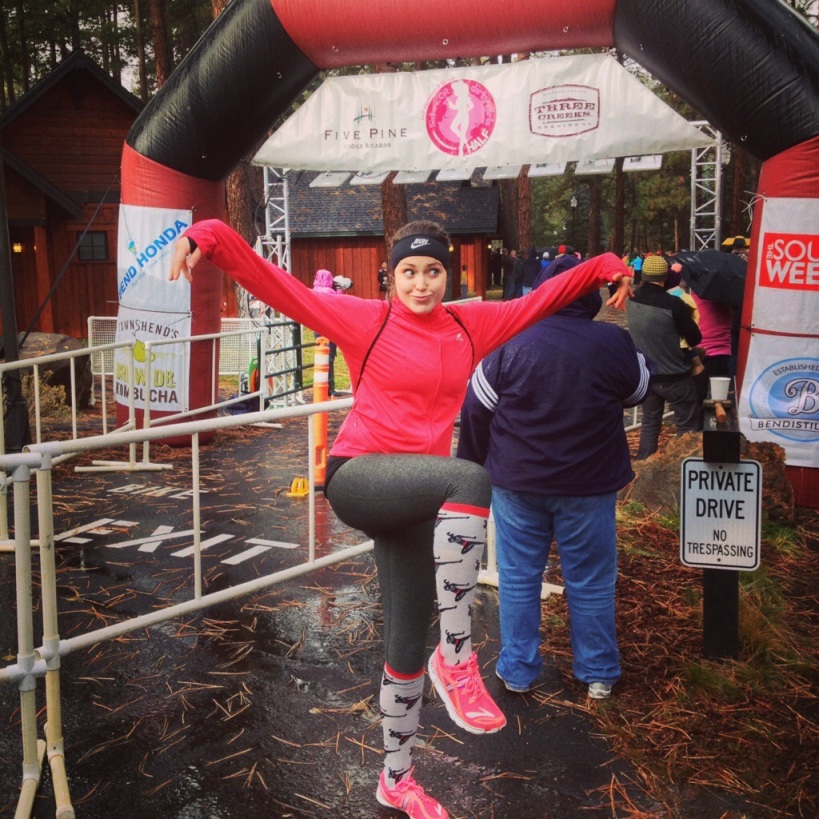 I looked out the window and thought, “Ugh, it’s raining. No one wants to go running in this.” Then, I had a reality check. I am not the Wicked Witch of the West, I am not made of sugar, and I am not water soluble. The rain isn’t going to make me melt, nor is it going anywhere any time soon. This is the Pacific Northwest. I better damn well get out there, get used to it, and use my integumentary system to the fullest of its protective abilities.

That being established, I went on a wonderful 6 mile recovery run. Recovery run? Yes, a run to recover from running. An easy run. One that is preferably devoid of any type of tracking device. A run more for your mind than your body. It is to remind yourself of why you run. Rekindle the love between your running shoes and the hard ground. This particular recovery run was very restorative, to both mind and body. I was feeling a little down after my performance in my last half-marathon. I took the time on my run to reflect on what motivates me, what drives me to lace up my shoes 6 days a week, and why I had suddenly become so competitive with others instead of just myself. It was only 2 days after my half, and the negative self-talk had to stop. This run was a cure-all. I returned home drenched with the perfect combination of sweat and rain and a giant smile pasted across my face. I had remembered how to run happy.

The Happy Girls Run half-marathon in Sisters, Oregon on November 2nd was beautiful. Central Oregon was the perfect change of scenery. Pine trees, red soil, and crisp air. Pine needles made itself a lovely ground cover intermixed with a little mud through the entirety of the 13.1 miles of single-track trail. The weather report said there was a chance of snow for the weekend of the race. Thankfully,  the frozen white stuff did not show itself the morning of the race, but the air was of the kind that cut straight to your lungs. To add to the beauty of the area, halfway through the race itself, we ran along the edge of Peterson Ridge that overlooked the little town of Sisters and the valley below. Not only was the view at once breathtaking and distracting, but the rainbow that had spread itself across the saturated grey sky increased the view tenfold. As beautiful as it was, you couldn’t stare too long. The trail was rather uneven and rocky at this point, and any glance away from the ground was a surefire way to trip and fall.

Beautiful scenery aside, this girl was anything but happy during that race. I started off like a shot. 7:30/mile pace for the first 4 miles. I ran alongside (technically directly in front of, as it was a single track trail) a woman who told me of her previous races she’d run. My favorite was the thought of running a marathon in Hawaii. Yes, please! I love how distracting conversation can be during a run. At the start of mile 5, she tells me, ‘I’m going to turn it on for a bit’ and took off. I didn’t see her until after the race.

It was a crisp 40 degrees F on race morning. The kind of cold that makes your nose run (get it, get it?). Right about this time, I reach up to wipe the snot from my nose — yes guys, girls have boogers too– when I realize just how much serous liquid is coming from my nose. But it wasn’t. The combination of a lingering sinus infection, cold air and the elevation change produced a lovely case of epistaxis. A nosebleed. During a half-marathon. Just what I wanted.

I wish I could say that I stopped, dealt with the situation properly and finished the race in good spirits. Any runner who has experienced any kind of malady or injury on a run can empathize. It is not the fact that you’re injured or experiencing some kind of systemic issue (vomiting, nose bleeds, GI distress etc.) that upsets you, it is the fact you had to stop running, slow down or take the time to recover. In my case, I was thoroughly angered by the fact that it took my nose nearly 5 minutes to stop bleeding. That was 5 minutes of vital race time lost. 5 minutes of stewing about starting out too fast. 5 minutes of watching my fellow female runners pass me by without so much as a look over their shoulder to the girl with her running glove shoved up her nose. But, I rallied.

I wasn’t happy, in case that wasn’t readily apparent. The rest of the run was spent ‘getting my mind right’ so to speak. The trail was beautiful, yes, but my mind wasn’t. I felt like I was running with a stormy black rain cloud hanging over my head, cartoon style. I had to find a mantra. “Good thoughts in (inhale), bad thoughts out (exhale.)” I ran with the dread that the 9 minute mile pacer was going to overtake me, like the Grim Reaper. He did.

I’d like to say I got happier, but all I could think about was finding that damn finish line. And wondering how terrible my time was going to be. I was frustrated by the downsides to running a race on single track trails. They’re wonderful when you’re alone, but running the same trail as a few hundred women…not so fun. Passing becomes an issue. Especially when said women haven’t been educated on proper trail etiquette. What is proper trail etiquette? Holler at the person you’re about to pass, “Passing on your left!” or “Passing on your right!” Do not wear headphones. If you must, keep only one earbud in. You’ll want to hear us when we holler. If you need to walk, step off to the side. Be kind to fellow runners. Don’t cut them off. And for goodness sake, smile! This is a happy run. Run for you. Not against the women around you. 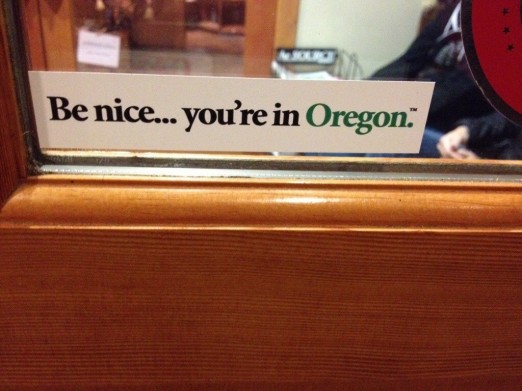 A very fitting sticker outside Three Creeks Brewing in Sisters.

I finished in 2:04 with a 9:28/mile average. The exact same time as my first half-marathon nearly a year ago. Not exactly the new personal best I was hoping for.

Negativity and nosebleed aside, it was an amazing weekend in Central Oregon. My running buddy, amazing friend and previous employer, rocked the socks off her first half in a couple years. She came across the finish line with a smile on her face, only a few minutes after I did. Here we are just after she crossed the finish line (can we tell someone is tired?):

We stayed at a condo in Sisters all weekend, complete with a hot tub. We spent the rest of race day in Bend shopping and catching up with friends. Dinner was spent at 10 Barrels Brewery. That burger was the best I’ve ever had. As was the wood fireplace outside. Imagine sipping a beverage while sitting outside all bundled up in front of a crackling fire. The smells, the sounds, the ambiance…And then the snow started to fall. Soft, white flakes floating down from the night’s sky. It couldn’t have been a more perfect end to a race day. Good company, great friends, amazing weekend.

I may not have run like a ninja, as my socks would indicate, but I ran my heart out. I ran against every negative thought in my brain and still crossed that finish line, even though it seemed a dreadful distance away. I once again neglected finish line cupcakes, but made up for it in trail mix consumption and pastries at Sisters Coffeehouse the next day. Cupcakes at the next race, I swear!